Does Vaping Make You Gain Weight? 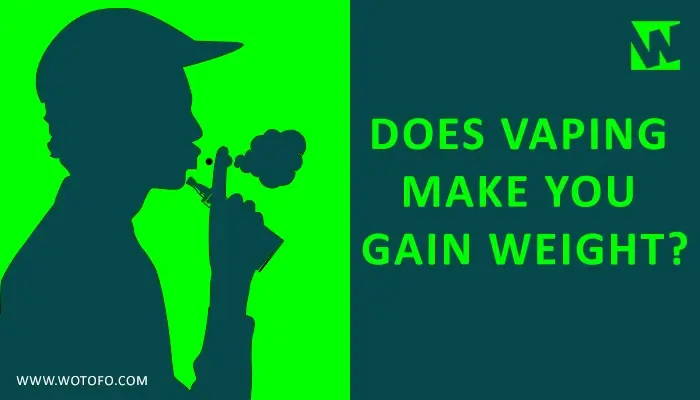 Have you ever heard that vaping and weight loss are somehow related? Have you ever asked yourself why most vapers tend to appear thinner and weigh less than non-vapers? Truly, a common stereotype about smokers is that they are often depicted as skinny and pale individuals. In fact, heavy smokers are well-known for often forgoing meals: the huge quantities of nicotine squash their desire to eat.

Also, another not uncommon stereotype of people who’ve recently quit smoking is their unparalleled desire for food, return of hunger, and noticeable weight gain. And these commence the moment you’ve quit smoking. The same occurs in vaping thanks to nicotine. It’s been established that nicotine is a natural appetite suppressant that keeps consumers relatively lean though in an unhealthy way.

In the past, before vaping was invented, some people would claim that they smoked to stay slim and fit. Even though regular cigarettes are perceived to be “dirty” since they produce smoke and tar, it is possible to find some conservatives who have kept the habit out of worry of adding some extra pounds. Some would console themselves and say “better dead than fat” as they pull and exhale huge clouds of smoke.

Thanks to the introduction of e-cigarettes and other smoke-free aids, there is a decreasing trend in the number of smokers worldwide. But still, some people are worried that it could affect their diet. Are there sugars or are there calories in vape flavors? Does vaping interfere with appetite? And probably the most disturbing question – does it make you fat? These among the many questions are the concerns of vapers and some smokers considering to shift allegiance to vaping.

Generally, ex-smokers do not want to go back to smoking, but they also fear experiencing a bulging waistline if they begin the new habit. Some smokers feel they don’t want much food when they are smoking. In fact, you could overhear some of them arguing that their consumption of nicotine-found vape flavors has helped them control their weight. Although that might be their thinking, it’s caused by the appetite-suppressing impacts of nicotine.

Today, e-cigarettes are being viewed as the best replacement for regular cigarettes in the quest to become a smoke-free nicotine industry. Vaping is rated to be close to 95% less harmful compared to cigarette smoking. Besides, health officials across the globe have published sets of evidence suggesting that vaping assists smokers become smoke-free.

With hundreds of millions of vapers all over the world enjoying the benefits of vaping, e-cigarettes use nicotine-based vape flavors, vaporized into vapor form, and inhaled to get the anticipated satisfaction. Nicotine found in vape flavor has the same effects as the one contained in a regular cigarette: it will similarly suppress your appetite that a cigarette does.

Several myths and misconceptions have arisen around the query of whether vaping can make someone gain weight. When vape flavors are available in plenty of flavorful tastes and varieties, it’s quite easy to perceive that they might cause an equal impact on our bodies as beverages and energy drinks of the same flavor do – but that doesn’t happen.

Weight gain only occurs when you take plenty of calories and at a faster rate than the body metabolism can burn all of them. The majority of vape flavors contain two fundamental base ingredients, vegetable glycerine, and propylene glycol, that contain a few calories.

Also, inhaling and exhaling vapor is completely different from ingesting a substance of equivalent caloric value: while vaping, you don’t ingest those calories. The calorie values of a substance are computed based on the energy dissipated when the ingredients of the substance are burnt, irrespective of how the body interacts with the substance. That said, the calorie value indicated on some vape flavors shows the energy value for that bottled substance, and that does not necessarily imply it plays a role in weight gain.

Can Vaping Make You Gain Weight?

If you’re using vape flavors after having been a smoker previously, you may have noticed some weight gain in the initial days of vaping. Reason: compared with regular cigarettes, vape flavors contain fewer amounts of nicotine. But this does not necessarily mean vaping contributes to weight gain.

While the presence of nicotine in vape flavors causes appetite-suppressing effects to the vaper, the hand-to-mouth action of vaping interferes with the food consumption delaying weight gain. Besides, vapers and smokers have expressed their views that they believe consuming nicotine assists them to control their weight. Nevertheless, some factors such as gender command the rate of weight loss.

For instance, female vapers lose weight at a higher rate than male vapers, especially when they are considered overweight. Also, it’s not interesting that vapers express concern about increasing their weight once they quit vaping. In some regions, it’s been reported that the reduction in nicotine prevalence may have contributed to an increase in obesity cases.

Consequently, the objective of vaping is not to do it forever, but to assist people to ease their addiction to smoking and nicotine intake, and ultimately stop nicotine addiction. Whereas smoking can be countered by quitting it immediately, it’s vital to reduce the nicotine addiction gradually, so that you do not subject your body to undue stress.

Like beer, beverages, and energy drinks contain calories, some people may be wondering what’s vape flavors and what’s contained in them. Might some calories may cause unwanted weight gains to them? Well, the fact is almost all fluids contain calories and calories are forms or sources of energy. Even that concoction of celery you’re taking to slim down contains calories.

So, if you’re stuck on whether vape flavor contains calories, then you must be guessing the answer, in fact, you have the answer! A typical vape flavor comprises of a base(s): either vegetable glycerin (VG) and/or propylene glycol (PG) blended with a flavoring and nicotine. In some vape flavors, nicotine is excluded and they’re said to be nicotine-free or zero-nicotine. Also, these vape flavors are available in different nicotine levels generally classified as high, medium, and low.

As to the number of calories contained in vape flavors, the answer is – a few or not many. For instance, usually, a gram of vape flavor contains roughly five calories, which is negligible compared to that piece of chicken or hot dog you’ve taken that contains hundreds of calories. So, even a heavy vaper won’t take a lot of them. Besides, vape flavor is not taken as food, but in vapor form. Moreover, it does not contain added sugars. Since there’re no carbs in the fluid, vapers should have nothing to panic about. After all, almost the entire vapor is exhaled, and only the taste is all needed.

Vaping To Lose Weight: Does It Work?

What’s in the public domain since its inception in 2003 and its progressive popularity is that vaping helps smokers to quit. Since the majority of cigarette users tend to be heavy smokers, it is very hard to stop and go cold turkey. Some have tried but it didn’t go well as they have found themselves back to the old ways. In the past, people had tried replacement therapies like patches and gums to no avail. Luckily, it’s been established that vapes are twice as effective.

Over time, with these e-cigarettes, you can comfortably reduce your nicotine intake and choose the best flavor amongst a wide selection of vape flavors. Also, should you opt to cut down your nicotine consumption to zero, it’s possible. More importantly, you’ll have dropped those harmful chemicals found in a regular cigarette. But how will vape save you from adding extra pounds?

Now, some people are struggling to re-shape their overweight bodies, and this is no longer a secret. This is because we’ve been bombarded by strange lifestyles and traditions of consuming junk foods and lack of exercise. We dream of having perfect bodies that will break necks but lack the idea of how to deny that burger and pizza and acquire good shape and healthy bodies we yearn for.

But vaping isn’t used as some kind of dietary supplement but offers a routine of keeping your hands and mouth busy. It used to create some sort of distraction: to distract the “mouth and hand” from holding and feeding that food that’s making you gain unnecessary weight. It will work with ease, just holding your vape will make your mouth occupied, making it hard to fixate on that high-calorie snack.

Then there is also the content of nicotine in the vape flavor. As aforementioned, nicotine causes appetite-suppressing effects making vaping not different from smoking. The only difference is that you’re ingesting (by vaping) appetite-squashing nicotine but none of those disastrous chemicals contained in regular cigarettes, hundreds if not thousands are confirmed to be carcinogens.

Why You Could Gain Some Weight After Giving Up Vaping?

Truly, you will add extra pounds after giving up vaping as your body requires a substitution for the addiction. When you’re vaping, you didn’t feed sufficiently because of one, two, or blend of the following reasons:

What’s more important is to understand the effect of nicotine on vape flavor. It’s a highly addictive substance but considered benign with negligible side effects provided it’s used on its own. Moreover, nicotine increases the count of calories used when the body is at rest between 7% and 15% and burns the fats to accelerate the metabolism process. Now, what comes into your mind after discovering that nicotine aids in the breakdown of fats? What happens to someone who absconds meals but vapes heavily? Your guess is as good as mine!

For vapers who have given up vaping, they focus on food and drinks and these put additional weight for the first couple of months. People who could not feel hungry even after a whole day of starving are now getting hungry and feeding repeatedly, eating snacks and all sorts of fast foods, in the streets, joints, and anywhere they find them. Interestingly, irrespective of the various side effects associated with vaping, some vapers are nervous about gaining weight than the consequences.

Does vaping make you gain weight? No, not really. This’s because the calorie value (content) of nicotine in vape flavors is low. Also, inhaling and exhaling vapor is different from ingesting (which is wrong and should be done). Vaping has nothing to do with the calorie value indicated on the vape flavor bottle. Even though vaping contributes to weight loss, this shouldn’t be the main reason for vaping.

Weight loss as a result of vaping is classified into two categories, and none of them is associated with fitness or nutrition. Firstly, vaping has a behavioral similarity to eating and particularly snacking and this keeps you away from snacks and high-calorie foodstuffs. Secondly, vape flavors contain nicotine which acts as an appetite suppressant and at the same time increasing the cell metabolism to burn fats.

Finally, our bodies are different and respond to nicotine differently. Therefore, it’s wise to always discuss any concerns with the doctors.