Can You Vape While Under the Keto Diet? 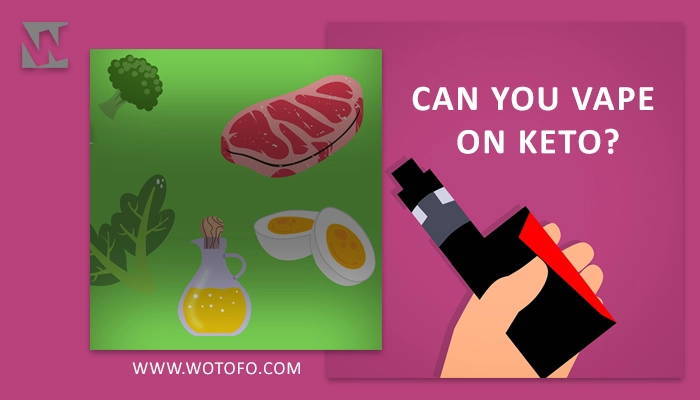 A few decades ago, it used to be said that some people smoked to stay fit. Today, even when regular cigarettes are increasingly becoming passé, it is still possible to find some people who are still doing it for fear of adding some pounds. Some would be heard saying “better dead than fat” as they continue puffing away, even as people keep on dying from smoking-related diseases such as lung cancer, heart failure, Chronic obstructive pulmonary disease (COPD), etc.

Thanks to vapes and other nicotine supplements, smoking is gradually becoming unfashionable; the number of smokers is dwindling day by day while vaping is taking the world by storm. But some people are worried if it might affect their diet.

For instance, are there calories in vape juice? Does vape juice contain sugar? Does vaping suppress appetite? And perhaps the big question is, does vaping make you pile some more pounds? These among others are the queries most vapers and those considering to transition from traditional cigarettes to vapes want answers to.

For ex-smokers who’ve crossed over to vaping, it’s not that they want to return to smoking, but they are afraid of suffering from an expanding waistline if they quit. Some vapers feel they don’t feed as much when vaping. As much as that may be their perception, the appetite-thwarting effects of nicotine may be the main reason. Either way, there is certainly a better option and an alternative that does not harm their health.

Now that you’ve been vaping and as things appear, you are gaining some weight. For the lack of a better word, you are becoming fat. You must be a worried person, aren’t you? For the last year, you’ve been striving to cut this weight but your efforts are futile. For that same period, you’ve been vaping regularly and are bewildered whether those e-cigarettes turned hobbies are thwarting your weight loss journey.

Should you stop vaping or what kind of experiment do you need? You need to learn some facts about vaping and diet. For sure, some e-liquids contain sinfully candied flavors that imitate those snacks and pudding we don’t dare feed regularly. We tend to treat ourselves to gratifying flavors such as cupcakes, gummy candies, cookies, or doughnuts in form of vape juice.

Truly, vaping a doughnut flavor does not affect your body, in the same way, eating the doughnut does. Still, some vapers are worried if vape juice actually contains calories, and if it has, what can those calories do to their weight loss business. In this post, we’re going to discuss how vaping affects your weight loss objectives whether you’re vaping nicotine salts, freebase vape juice, or if you’re vaping under a keto diet.

Pros and Cons of Vaping You Need to Know

Should you count calories while you’re vaping?

Simply, no. As it is, vape juice does contain calories, but their volume/amount in the mixture is negligible. A milliliter of vape juice contains approximately 4 – 5 calories. This translates to 120 to 150 calories in a bottle of 30 ml.

Now, what matters is how frequently you vape; the number of calories you take per day will be determined by how often you vape. For example, if you consume 1-ml five times a day, that’s 20 to 25 calories a day. If you go up to 10 ml a day, you’re looking at 40 to 50 calories.

Let’s put things into perspective. A celery stalk has 6 calories, thus containing what a milliliter of vape juice has. Meanwhile, an average cupcake contains 120 or more calories. From the two, its obvious calories in vape juice certainly aren’t abundantly sufficient to sabotage your weight loss journey.

Additionally, keeping in mind that an average person burns around 50 calories an hour while sleeping, it’s really senseless to count calories in your e-juice.

What happens to the calories, where do they go?

Another worrisome issue that you may have regarding calories in vape juice is where they end up, are they digested? Scientists haven’t yet established where these calories really go after they have been absorbed in the lungs. Maybe they are subjected to a similar process as those ones that we get from food.

Since vaping involves inhaling vaporized vape juice, some people, especially newbies may wonder what’s contained in this substance and question themselves if it contains calories that may pile some extra pounds on their bodies. But they should recall that everything has calories unless it’s not something (matter) because calories are basically forms of energy that give matter its mass.

Even those celery stacks you’re munching in a bid to evade sugary snacks and lose some weight contain calories, only that they are way less than that contained in a cupcake or doughnut. So, if you’ve been asking yourself whether e-juices do have calories, now everything is clear. Typical vape juice is a blend of ingredients including nicotine, flavoring, vegetable glycerin (VG), and propylene glycol (PG). Now, these elements are made available in a mix of different concentrations and ratios.

As to the number of calories contained in e-juices, the right answer is – not many. Often, one milliliter of e-liquid contains around 5 calories, which is way less compared with chicken sandwiches or hamburgers that contain nearly 300 calories. So, it doesn’t matter how frequent or how much you vape since the number of calories in these vape juices is negligible.

Besides, vaping is different from feeding; vape juice doesn’t have added sugars. There is nothing to stress you as vape juice has no carbs. If this information sounds unconvincing to you, you can as well exhale all vapor that comes out of the vape without inhaling anything to the lungs.

What is a Dry Hit Vape? Tips to Avoid Burnt Vape Taste

Can vaping make you gain weight?

What are your thoughts about it? Do you suspect your weight gain is caused by vaping? I don’t think so. By now, you should be convinced that vaping has no business with your gain. Some vapers don’t crave or feel tempted to feed on those sugary snacks as they can get their supplement from vape juices.

More importantly, nicotine is not only a stimulant but an appetite suppressant implying it can make you lose some weight (by starving yourself) if used regularly. You must have noted that the majority of heavy vapers are “skinny”, they tend to starve themselves. You must have also noted when people quit smoking, they usually add some pounds.

It’s hardly a secret, lots of people are really struggling with their extra pounds, and some are still overfeeding and becoming out of shape. They dream of a perfect body that’ll turn heads but lack the idea of how to reject those yummy burgers and pizzas and get into the shape they want. One of the ways is to “distract your mouth” so you’re not regularly putting “unnecessary” food into it. Vaping is a solution to it, keeping both your hands and mouth engaged, so you aren’t fixated on the next high-calorie junk meal.

A survey conducted in England involving people who consume vape juice for weight loss found that there is a degree of concern amongst the smoking fraternity about despairing and gaining weight. To them, vaping really works as intended. Vaping helps ex-smokers to check on their weight through continued exposure to nicotine and its appetite-suppression effects as well as habitual aspects of vaping.

The survey, published in the Addictive Behaviors journal summarized that one out of sixteen smokers in England believe that if they begin vaping after they’ve given up smoking, they would not pile extra pounds on their bodies. The report says one out of twenty-two persons is solely consuming vape juices for weight control. More interesting, the researcher says that should evidence crop up that vapes prevent weight gain, then one out of eight smokers would be willing to switch to electronic cigarettes.

A low Glycaemic Index (GI) implies that these sugars lack the potential to spike blood sugar levels. Particularly, there are no carbs in vegetable glycerin, so it doesn’t interfere with your insulin levels. Although propylene glycol contains carbs, their volume is so negligible that they are insignificant in the daily net carb count.

Is Vaping Better Than Smoking? A Complete Smoking vs Vaping Guide

The holy grail of all keto dieters is introducing ketosis into their metabolism. In biology, Ketosis is the process that occurs when the body lacks enough carbs to burn to generate energy. Instead, it processes (burns) the stored fats and converts them into ketones, which are then used as an energy source. Some vapers may be worried whether their addiction to vaping might result in spikes in blood sugar levels that may ultimately eliminate them out of ketosis, interfere with the weight loss goals, and completely destroy their keto health.

Understandably, this has become a major concern for the vaping community. It’s senseless to improve your health by feeding a balanced diet, hitting well your routine macros, only to ruin these efforts through vaping. So to put your mind at peace, it has been established that vaping doesn’t destroy your keto health.

Ketogenic diets are becoming popular ways of weight control. Additionally, they’re becoming some of the best lifestyle assistants to getting “admirable” shape. To some vapers, vaping under the keto diet is very normal and healthy. While it’s not recommended to fast with keto, but rather stick to particular food groups – fats/oils and proteins but mostly avoiding carbohydrates – some people would wonder whether consuming vapes while at the same time fasting is wise if they are required to abscond meals for a certain period. Luckily, vape juices don’t contain carbs, so people who are under a ketogenic diet can continue vaping.

For the people fasting for religious grounds, they may not be allowed to follow their normal feeding routine. They may even not be allowed to drink water – a good example is the Muslims when they’re observing the sacred month of Ramadan. Since vape juices have a negligible number of calories, you can still vape while you’re on a fasting schedule.

Can vaping eliminate you from ketosis?

Not really. This is great news for all vapers, vaping won’t knock them out of ketosis. Instead, it offers vapers the “sugar kick” they require, without consuming sugar and helps them maintain a healthy keto lifestyle. The ingredients of vape juice won’t knock vapers out of ketosis. Surprisingly, some vapers have reported benefiting from the keto diet as it assists them to curb their sugar cravings.

Whether you are dieting, slimming down, or just trying to get your fingers and mouth out of that burger, vaping may be a great assistant to achieving your goals. If you’re using regular cigarettes, vaping may as well help you avoid them. It could as well help you take up a few exercises and stay fit, because immediately as you give up smoking, you’ll boost your energy thanks to getting fresher air – because carbon monoxide from burning cigarettes prevents body organs and tissues from getting enough oxygen – you’ll be able to do much more.

Blend with appetite-thwarting effects of nicotine, after you’ve given up smoking, you’ll most likely stop overeating. If you crave a snack or any other unhealthy food, just take a couple of draws from your vape mod and it should be adequate to quell that hunger pangs and refresh your energy. vaping could be that change you’ve been looking for to turn your life, cut some unwanted pounds and simultaneously get yourself fit and healthy.