Is Vaping Better Than Smoking? A Complete Smoking vs Vaping Guide 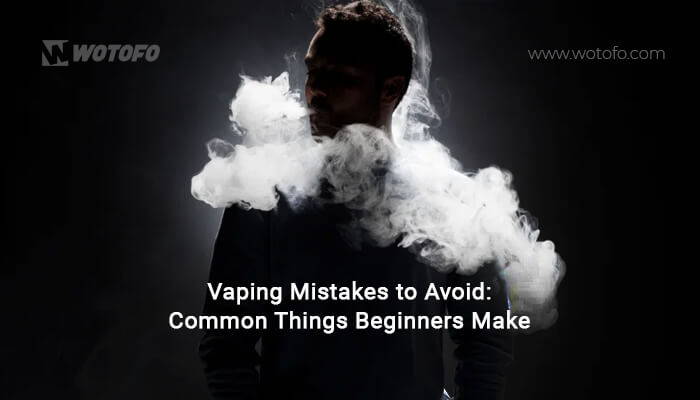 Today, the world is full of scary types of cancers, a situation that has caught the attention of scientists and medical researchers to study some of the possible causes and how to avoid them. Smoking cigarettes alone can cause lung, esophagus, mouth, throat, stomach, colon, rectal, kidney, cervical, bladder, liver, among other types of cancers.

It’s been established that every time you take a cigarette puff, you inhale over 7000 chemicals into your lungs and these could spread to other body organs, including sixty-nine known carcinogens. For this reason and others, e-cigarettes and vaping, in general, are increasingly being marketed and crusaded as safer alternatives to traditional cigarettes. There are also myths of vaping which you need to know before starting.

All recent studies are pointing to the fact that vaping is safer and better than smoking. Studies and public health authorities across the globe have established that vaping is 95% safer than conventional cigarettes. Also, the Cancer Research agencies are supporting e-cigarettes in their fight against smoking-related cancer diseases.

Since vaping is fairly new, researchers are learning its long-term health effects. One undeniable fact about e-cigs, vape flavors, and vaping is that they contain nicotine that has known health effects such as: highly addictive, toxic to developing fetuses, and harmful to brain development in youths, among others and vapers tongue. However, its effects aren’t as toxic as the ones affiliated with smoking.

Both smoking and vaping heat substances convert them into inhalable forms. For instance, an e-cig uses a battery to power the coil which as a result heats vape flavors into vapor to generate an aerosol that is inhaled, hence the name vaping. The vape flavor contains nicotine and several chemicals that create vapor, and are eventually inhaled into the lungs. You can read more on how to vape properly here.

On rare occasions, vapes malfunction; cases like overheating, short-circuiting, accidental firing, and may cause explosions or severe burns to the holder. On the other hand, ordinary cigarettes rely on flames to convert them into smoke. Burning cigarettes causes the formation of dangerous chemicals that you inhale every time you draw a puff from the cigarette. No combustion occurs in vaping implying that fewer harmful chemicals are created. However, this doesn’t mean that the ones that are left are safe, they are equally dangerous only that they are few.

Now, what would be the most appropriate answer for “is vaping better than smoking?” the right response would be no! It’s not better. While a vaper may not be ingesting the tar which is common in ordinary cigarettes, vaping has a set of potentially harmful health hazards. Several ingredients contained in vape flavors can result in lung and heart damages.

Besides, vapes and other related devices have been reported to cause fires, explosions inflicting burns and injuries to the users. Fortunately, vaping is considered to have fewer health hazards compared with smoking. Let’s compare the two. 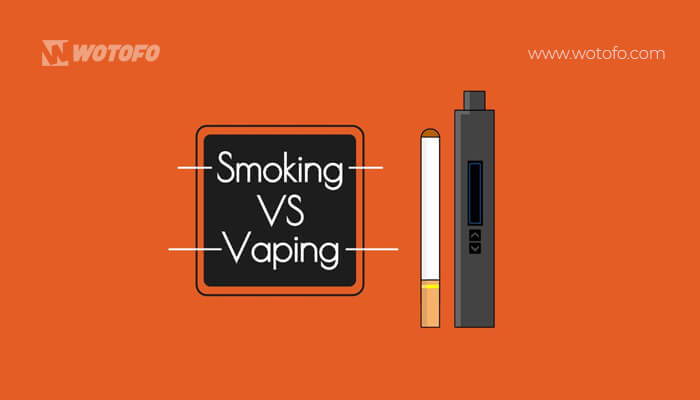 If you’ve some time thought or tried kicking the smoking habit, you aren’t alone. About 7 out of 10 smokers confess that they want to quit. And indeed quitting the smoking habit is a wise idea for your health – smoking is harmful to almost all your body organs, the heart included.

Almost one-third of heart diseases are a result of cigarette smoking. In retaliation, you might be tempted to try an alternative way of ingesting nicotine and that’s vaping.

1. E-cigs are less harmful than traditional cigarettes, but not entirely safe

Vapes heat nicotine (primarily extracted from tobacco plants), flavorings, and various chemicals to form an aerosol that is inhaled.

According to research, ordinary tobacco contains over 7000 chemicals and the majority of these chemicals are poisonous. While we aren’t sure the exact number of chemicals in vape flavors, the fact is that they expose vapers to fewer poisonous chemicals compared with conventional cigarettes.

Nevertheless, there have been reported cases of lung injuries and deaths affiliated with the consumption of vape flavors. But the majority of these cases have been associated with vapers who have modified their vapes or have been using black market and cheap vape flavors. This is particularly predominant for users of vape flavors containing tetrahydrocannabinol (THC).

2. Studies suggest that e-cigs and pod mods aren’t good for your lungs and heart

Nicotine is the main ingredient in traditional cigarettes and vapes, and it’s a highly addictive agent. It may cause vapers to crave smoking and suffer from withdrawal symptoms if they skip or ignore that craving.

Researchers associate nicotine with causing high blood pressure and spiking of adrenaline levels that eventually increases your heart rate and possibilities of experiencing a heart attack.

Since vaping is fairly new, there’re lots of unknown facts about it including the kind of chemicals found in vape flavors and their long-term effects on your health. Vapers and non-vapers need to know that vaping has potential harm to their bodies. It exposes vapers to several types of chemicals that are yet to be understood and that’s probably harmful.

3. E-cigs are addictive as conventional cigarettes

Vape flavors and traditional cigarettes contain nicotine, and studies show that nicotine can be as addictive as other hard drugs like cocaine and heroin.

The worst is that some vapers consume more nicotine than they would if they were smoking – by consuming high-level nicotine vape flavors, using extra-strength cartridges, or increasing the e-cig’s wattage/voltage to obtain a tougher hit on their throats.

4. The new generation is severely hooked on nicotine consumption

Especially the youths, e-cigs and pod mods are becoming increasingly popular compared to other tobacco products. A report published in 2015 showed that the use of e-cigarettes among high school going youths had risen by 900% and about 40% of these e-cig users had never tried smoking before.

Studies have shown why vaping is enticing to the young generation and formulated three facts.

All users, irrespective of their age find the lack of smoke in vapes a bit more appealing. No foul smells like in regular cigarettes reduce the probability of stigma.

5. Cause of some cancers

Various vaping products may contain cancer-causing agents (carcinogens), but this occurs in smaller amounts than in regular cigarettes.

Nevertheless, there is very little study concerning whether or not vape flavors could increase the chances of developing various types of cancers.

For now, the association between cigarette smoking and cancers is certainly known – with cigarettes being connected with very many types of cancers.

Other than harmful chemicals, some vape flavors and vapes are manufactured with traces of heavy metals such as lead and nickel that are harmful to our health.

While these levels may be a bit lower than what we are supposed to be exposed to when smoking ordinary cigarettes, it is hard to make comparisons between smoking and vaping because they are different delivery methods.

Studies suspect that the heating subjected to the vape can release some harmful metal traces into the vapor, causing high toxic metallic concentrations to enter into your body systems that it would be found in the vape flavor alone.

These concentrations can vary from one manufacturer to another, one type of vape to another, and ultimately from one puff to another. Various vapes come with varied settings that eventually affect the heat/temperature of the vape coils.

What Vaping Does to Your Lungs? 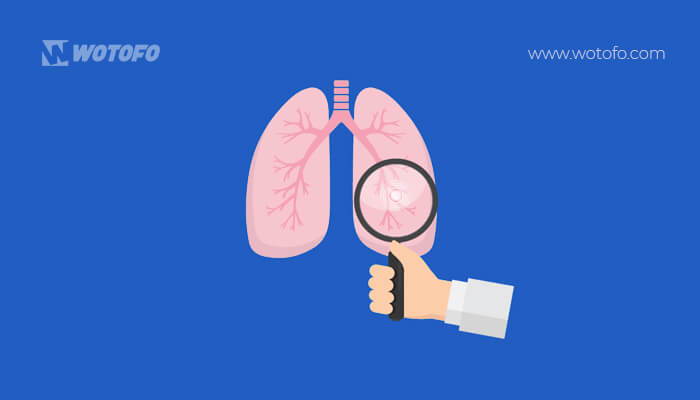 One study found that ordinary e-cigarette users or vapers, in general, were nearly two-timed as likely as non-vapers to suffer from chronic obstructive pulmonary disease (COPD), a disease that is characterized by chronic bronchitis and emphysema.

The risk holds up even when researchers take into consideration potential confounders such as the application of various tobacco products. Some of the critical health conditions related to smoking ordinary cigarettes have to do with the respiratory system such as COPD and the research has revealed that vaping might as well be linked to them.

Even where vapers don’t suffer from serious respiratory diseases, they may develop or experience breathing complications as side effects associated with vaping. In one of the studies, vapers claimed breathing issues or chest pain at the similar rates smokers were reporting.

Just like ordinary cigarettes, e-cigarettes and all types of vapes may also contain traces of debris that when ingested may cause irritations of the lungs. However, tobacco smoking creates more debris than e-cigarettes do. The deeper these tiny particles are inhaled into the system, the more damages they can inflict.

Some vape flavors, particularly those containing tetrahydrocannabinol (THC) have traces of vitamin E acetate and a various additive that may cause severe lung inflammation and breathing complications generally referred to as EVALI, that is, cigarette or vaping use-associated lung injury. Since this condition was discovered in 2019, it has led to the hospitalization of thousands of victims and even deaths to hundreds.

Compared with ordinary cigarettes, vapes have not been with us for a very long time, hence there is little known about their long-term impact on human health.

Nonetheless, research contacted recently proposes that vaping may increase the probability of various health conditions usually experienced by smokers such as the ones associated with respiratory, immune, cardiovascular, and brain systems.

ALSO READ: Mouth To Lung vs Direct To Lung

Research shows vapor exhaled into the air may contain harmful substances like nicotine and heavy metals. For this reason, just like smoking is prohibited in some public places, vaping is as well banned in the same places. Secondhand vapor can cause infections in a similar way passive smoke from burning cigarettes may.

Smoking kills! Anti-smoking campaigns across the globe are teaching people the dangers associated with smoking and have managed to reduce the population of smokers.

Although vaping has underlying dangers to the user, it’s a bit safer and better than smoking. Therefore, to reduce the harm and dangers associated with cigarette smoking, some smokers are increasingly switching to vaping.

These devices feel somewhat similar to ordinary cigarettes, appear the same, and contain the same substance (nicotine) with minimal toxic substances as compared to regular cigarettes.

Vapes makes the transition away from cigarettes a little bit smoother while offering some potential health benefits.