What Is Popcorn Lung? 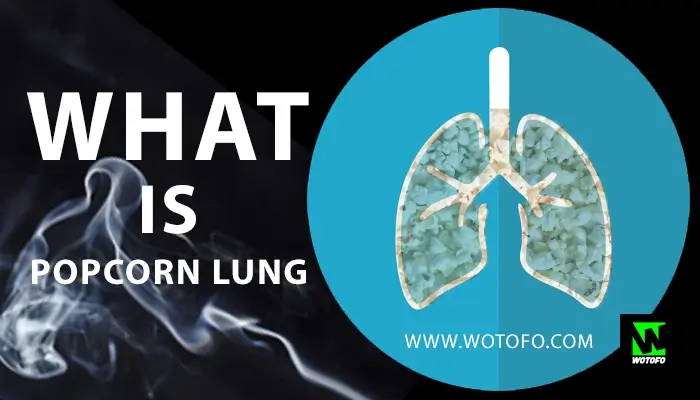 The term “popcorn lung” is a dialect tag for a severe condition whose scientific name is bronchiolitis obliterans (BO) or simply obliterative bronchiolitis. The condition occurs when the small airways inside the lung (bronchiolitis) become scarred, thicken and efficiency is reduced.

In severe cases, the disease is incurable and a lung transplant is the only option. Nevertheless, despite being the best treatment procedure for popcorn lungs, lung transplant itself can as well be a cause too. Actually, one of the associated complications is called bronchiolitis obliterans syndrome and it’s caused by a lung transplant.

Popcorn lung can result from exposure to either medical agents or environmental sources. Inflammations as a result of fungal, bacterial, and viral infections, or ingestion of chemical particles occur in the bronchioles.

While diacetyl, a diketone commonly used in food flavoring is the chemical most commonly associated with obliterative bronchiolitis, scientists have discovered other potential chemicals such as chlorine, formaldehyde, hydrochloric acid, phosgene, mustard gas, nitrogen IV oxide, ammonia, sulfur IV oxide, as well as fumes from welding.

Why Is Bronchiolitis Obliterans Referred To As Popcorn Lung?

Over a decade ago, a physician disclosed that a couple of ex-workers in a microwave popcorn facility had developed a strange and acute lung infection. It was later reported that some of them were critically ill and required a lung transplant. Investigations were conducted to ascertain the probable cause of this rare and disabling condition.

Ultimately, researchers found that the disease was caused by vapor from butter flavoring that is added to popcorn. In the factory, workers were exposed to diacetyl, the buttery-flavoring chemical that led to the ailment. While the flavoring may be tasty, its effects are deadly as it is associated with thousands of bronchiolitis obliterans cases, a severe and irreversible lung complication.

Consequently, the popcorn manufacturer excluded diacetyl from their production chain, but still some people expose themselves to the chemical – not only through food processing as a workplace hazard but also through vape flavor flavoring.

When diacetyl is inhaled into the body, it causes bronchiolitis obliterans, commonly known as “popcorn lung" and which is a scarring of the alveoli which results in the thickening and ultimately narrowing of the airways. Whereas calling the complication “popcorn lungs” may sound less-threatening – considering the beauty that comes with popcorn and those sessions – it’s a severe lung condition that’s characterized by constant coughing, shortness of breath, and wheezing among other dire symptoms.

Although it’s well-known that diacetyl is the source of popcorn lungs, the chemical is commonly used in the preparation of vape flavors. it’s added to vape flavors to complement different flavorings like vanilla, coconut, maple, et al. so, whilst diacetyl was completely eliminated from popcorn products as it could cause bronchiolitis obliterans among factory workers, vape flavor users are directly ingesting the harmful substance into their bodies.

What is Stealth Vaping? How to Zero Vape? 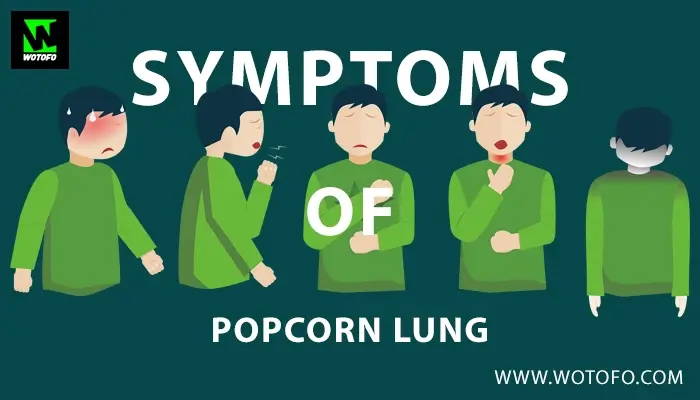 In a popcorn lung patient, scarring occurs on the lung tissues (air sucks), thickens the airways, and finally blocks them. This halts the proper function of the lungs. With similar symptoms as the ones associated with chronic obstructive pulmonary disease (COPD), popcorn lungs can appear barely two to eight weeks after exposure to causing agents. The early symptoms of popcorn lungs are:

Even though bronchiolitis obliterans is an absurdly rare condition, its early signs are much similar to common colds. Over time, two weeks to a few months, those symptoms persist and progress to become more severe. Ultimately, the condition causes various severe problems such as breathing difficulties and poor absorption of oxygen. Popcorn lungs are an irreversible condition: failure to seek medical attention may result in respiratory complications and cause death within months.

In severe cases, lung transplantation may be the best option. Sometimes the disease is hard to diagnose. Even though Computed tomography (CT) scans as well as pulmonary function diagnoses can provide concrete clues, the only certain and reliable method is by performing surgical lung biopsy.

The long-term prospect of bronchiolitis obliterans depends on what causes the disease and how fast it develops. For example, cases associated with rheumatoid arthritis can have a particularly poor outcome. That said, it’s wise to work with a health professional to formulate a treatment plan that’s specific to the source of the disease and other underlying factors.

How Long Does Nicotine Stay in Your System from Vaping?

You can only prevent popcorn lung by preventing lung damage. And the best way to prevent lung damage is to avoid factors that cause or accelerate the condition. Some of the measures include:

How’s the exposure to diacetyl associated with harm? Now that vapers have grabbed bits of information from online forums and google searches, they are still bewildered as to whether they should stop using e-cigarettes for containing hazardous chemicals. But as much as there is a lot of misleading information online, diacetyl remains the main culprit linked with popcorn lungs.

Diacetyl is an organic compound naturally occurring in fermented products like cultured milk and alcoholic drinks. Also, diacetyl is found in plants such as tobacco and is commonly used to flavor processed foods. It has a buttery taste in addition to sweet flavors.

In the past, diacetyl was excessively used in the production of butter-flavored microwave popcorn and was consumed by millions of people across the globe. It was later discovered that diacetyl was directly linked with bronchiolitis obliterans, and popcorn manufacturers stopped using it.

The chemical name or IUPAC system name of diacetyl is butanedione or 2,3-butanedione. It belongs to a chemical family referred to as diketones. Other than diacetyl, acetyl propionyl (AP) is another commonly used diketone as a flavoring chemical. When ingested, both diacetyl and acetyl propionyl pose no known risks.

The Food and Drug Authority classifies both chemicals as “generally recognized as safe” (GRAS), implying there have been no diagnosed negative health issues linked with drinking or eating them. Notwithstanding, inhaling diacetyl and related flavoring, probably in large quantities, can result in irreversible lung complications.

While acetyl propionyl is slightly as dangerous as diacetyl, industrial diacetyl fumes is the main cause of bronchiolitis obliterans. The Centers for Disease Control and Prevention (CDC) considers obliterative bronchiolitis and other related lung diseases as “flavoring-related lung complications”.

Second-hand vape: is it harmful or not?

Now that you’ve known the potential risks associated with consuming diacetyl, this might sound terrible. Now, as we all know, there’re a vast variety of flavored vape flavors on the market. In the past couple of years, sweet dessert vape flavors have grown immense popularity and a few vape flavor manufacturers have adopted butter flavors that would later be deemed unfit for inhalation. But considering the principle of toxicology, the degree of exposure combined with the dose makes the poison.

Truly, the popcorn factory workers were exposed to far higher degrees of diacetyl than you would get from a vape mod, even if the vape flavor in question was to contain diacetyl as the main flavoring ingredient. If we were to compare the levels of diacetyl in ordinary cigarettes and in vape flavors, indeed, an ordinary tobacco cigarette contains approximately 300 ppm of diacetyl. This level is over 100 times what ordinary e-cigarette aerosols contain.

Whilst Diacetyl is a commonly used flavoring chemical in vaping products, it can be blended with different chemicals or used as an alternative (acetoin and acetyl propionyl).

Is Vaping Associated With Popcorn Lung?

Just as there have been no diagnosed negative health issues linked with eating or drinking diacetyl, so is vaping. Claims suggesting vaping can cause popcorn lungs cannot be substantiated by any proof. There is no evidence to vindicate vaping as a cause of obliterative bronchiolitis, in ant vaping research, but maybe the exposure to diacetyl from regular cigarettes may provide some hint about the risk – as ordinary cigarettes contain far higher levels of diacetyl compared to vaping products. Nevertheless, popcorn lung has never been associated with cigarette smoking.

In spite of the hundreds of millions of cigarette smokers across the globe who regularly inhale diacetyl, none has been diagnosed with obliterative bronchiolitis, and if any, smoking has never been the main cause. According to the National Institute for Occupational Safety and Health (NIOSH), smokers with popcorn lungs exhibit more severe levels of lung damage compared with smokers with normal smoking-related respiratory infections such as emphysema.

Despite the renowned risks of smoking, obliterative bronchiolitis isn’t one of its outcomes. Truly, diseases like lung cancers, chronic obstructive pulmonary disease (COPD) as well as heart diseases are directly linked with the effects of smoking from inhalation of hazardous compounds like tar, carbon II oxide, and carcinogens. All these are products of combustion.

Since vaping doesn’t involve combustion, the majority of those harmful products of ordinary cigarettes are absent. Besides, barely one percent of the diacetyl chemical contained in ordinary cigarettes is present in vapes. Arguably, there is simply no proof that vaping causes obliterative bronchiolitis.

The Most Popular Vape Tricks You Need to Know About

So, you might get worried about what all these fusses are all about! Well, through substantive years of studies, scientists have established the safety of diacetyl chemicals when used as a food additive. Nevertheless, the least degree of exposure should be adhered to; an average person would require trace amounts of diacetyl in the food or drink they consume.

This is because the research is done in 2002 by Occupational Health Scientists at six of the microwave popcorn factory workers to ascertain if the exposure to vaporized diacetyl had a hand in their severe obstructive lung infections. The study showed that these workers had developed an incurable kind of lung disease referred to as constrictive bronchiolitis, due to a high degree of diacetyl exposure. This implies that the safety of diacetyl is significantly determined by the level of exposure.

In another case study, working in a buttery flavoring and heated soya bean oil mixer department was linked to higher levels of vaporized diacetyl exposure than working in the other departments of the factory.

Mixer employees who managed to work for at least twelve months in these zones had higher chances of developing respiratory diseases. Subsequent toxicology surveys have established that vapor produced by heated buttery flavoring causes damage to respiratory airways in animals. Overall, diacetyl has been directly linked as the source of flavoring-related lung infections.

Can Acetyl Propionyl Be A Better Substitute?

When safety concerns of vaporized diacetyl became a major problem, the flavoring industry devised an alternative (Acetyl Propionyl, aka 2,3 pentanedione) that gave an unparalleled buttery flavoring profile. Their chemical structures are much similar: acetyl propionyl is an alpha-diketone with five carbon atoms whereas diacetyl is an alpha-diketone with four carbon atoms.

So with acetyl propionyl as a substitute, was the problem solved? Not really, studies have established that inhalation exposure to 2,3 pentanedione causes epithelial damage of the airways, which is very similar to what diacetyl causes.