< Back to blog home

How to Maximize Airflow and Power to Produce Thick Vapour Clouds 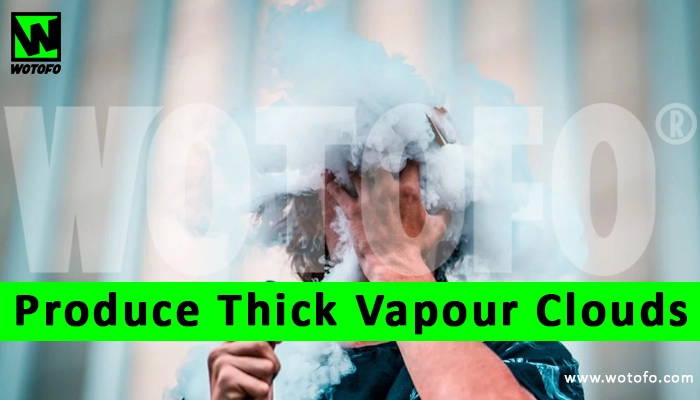 As a newbie, you didn’t care about the size of the cloud and the other beauties that come with sub-ohming. For you, vaping was all about taking nicotine and getting that comforting throat punch that reminded you of smoking. But as time passed by, things changed; as you moved away from ordinary cigarettes and got accustomed to vapes, generating sizable vapour clouds began to appear more and more thrilling.

Probably at that point, you’re not a full-fledged cloud chaser, but you started feeling that that wispy vapour from a pen-sized e-cigarette wasn’t enough. Chances are, you’ve attempted various tricks to increase vapour production from your devices. Over time, as you tweaked your setup and learned some new aspects about e-cigarettes, you started pulling some serious clouds. But this wasn’t enough, it couldn’t help you win a cloud-chasing competition. Only those key lessons vapers learn can make your clouds as large as you desire.

Nevertheless, some posts regarding how to increase vapour generation focus on coil rebuilding but not everyone is interested or can wrap their own Clapton wires. Luckily, modern vapes are as far as the majority of casual vapers are fascinated in going.

So for anyone who wants to generate bigger vapour clouds, but isn’t particularly seeking to rebuild their own coils, this post is meant for them. Here, we’ll explore the appropriate devices, techniques, and vape flavor that you require to maximize vapour production from your vape.

A product of the merger between Wotofo and MrJustRight1, the WOTOFO PROFILE RDTA is an RTDA version of the renowned Profile RDA. With this “beast”, it’s sure to achieve your cloud chasing expectations. The setup enhances RDTA juice transfer from the bottom to the top with the use of four stainless wicks. Profile RDTA absolutely equals its label; it converts from an RDTA to RDA and vice versa.

Mesh vs. Regular Vape Coils: Which One You Should Use?

The Recurve RDA, a product of the merger between Wotofo and Mike Vape is a powerful single coil rebuildable drip atomizer with a peculiar airflow system that offers great vapour production. Its bow-shaped wall combined with a curvy drip tip allows an irresistible airflow and smooth draw, ultimately giving a mind boggling vaping experience. With six multi-slated air inlets on either side, the air channel enables a multidirectional airflow to enter the atomizer playing a very central role in the delivery of flavor and huge clouds. 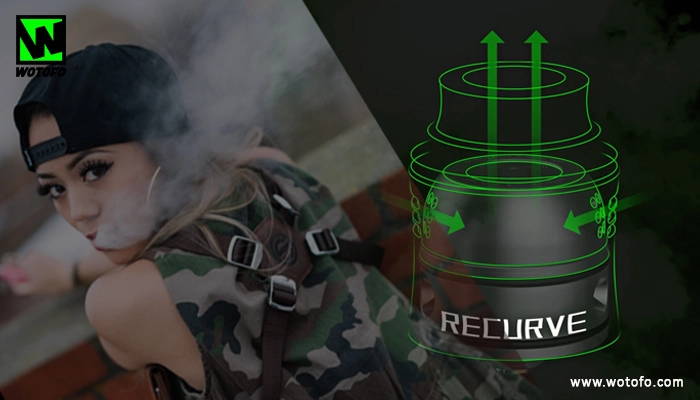 More airflow results in more cooling effects and the production of more vapour. As a result, there is optimal aeration over the coil, keeping the temperatures lower, sufficiently enough to prevent burning of the wick caused by the high power settings. Besides cooling your setup, maximum airflow allows more vapour condensation creating thicker clouds. So by maximizing your device’s airflow, you’re allowing it to produce dense and huge vapour clouds.

How Does It Work?

As the vape flavor vaporizes, vapour saturates in the space above the heater (coil), and to create more is by converting some vapour (through condensation) into vape flavor. This process effectively prevents the generation of new vapour if the airflow is fully closed off. But when air is flowing rapidly across the heater, a “new vapour” replaces the “old vapour'' implying that you’re getting more vapour compared with what you would with tight airflow. It’s one reason huge vapour clouds are produced with more airflow.

Explaining the Joule-Thomson effect – when air passes through a throttled orifice, it causes a reduction in temperature hence the cooling effect. Other factors such as speed, shape, and size of the orifice, and orientation) impact the rate of cooling. In simple terms, just the air flowing into the vape hastens the condensation of the vaporized e-juice.

Condensation is all you have to form huge clouds. As the airflow crosses over the heater, cooling of the vaporized e-juice occurs, condensing it into a mist of droplets. By increasing the airflow over the coil, more condensation occurs and more visible vapour is generated. So when you’re vaping, you aren’t really exhaling “vapour” but an “aerosol” that constitutes a mixture of tiny liquid droplets.

Here, the simple lesson is that you’ll require more power to produce big vapour clouds. Now, if you adjust your power setting to 80 Watts, you’ll get bigger clouds than someone vaping at 40 watts – when other factors are held constant (same tank, same e-juice, equal airflow, et al.). Although it may appear that simple (and it is), there are several factors you should consider before cracking the device up to 100 watts.

Firstly, by increasing the power, more current is drawn in the coil increasing the heat produced in the tank, which requires additional airflow to counterbalance the excess heat. Secondly, while some vapers are okay with hot vapour, others are not. This implies that it is not wrong to draw hot vapour neither is it right. So you need to experiment to determine your most appropriate spot.

Note that increasing airflow has other outcomes too. It plays a central role in the convenience of your draw. More airflow causes an airer draw whereas less airflow causes more resistive draw. Again, the choice for airflow varies in different vapers, so you’ll have to experiment to find what suits you.

To adopt a particular power setting, your tank of choice comes first. For instance, if you’re to use a sub-ohm tank to cloud chase, you ought to know that your device is compatible with a variety of coil types, and all are rated differently.

The recommended power settings are often indicated on the coil packaging, and there is always a guide on how you should go about them. Nevertheless, these settings aren’t set for a robot, so if you feel that’s not enough, you can try some more (but not too far from the suggested settings).

What is Mouth to Lung (MTL) Vaping and How to Inhale Properly?

Is The Choice Of Battery Important In The Generation Of Huge Vapour Clouds?

Yes, your battery choice plays a very critical role in the production of thick vapour clouds. For example, a regulated vape mod offers variable wattage and voltage settings, providing you with a broad range of spots to explore.

Conversely, simpler vapes have fixed voltage. You can use both devices for cloud chasing, but mods using variable voltage are often preferred. The more you can adjust the wattage on the battery, the more you are able to fine-tune your battery and airflow to get maximum satisfaction.

Which Is Better, Variable Voltage or Variable Wattage?

Although the voltage might work, to make it more effective, it would be easier to adjust the wattage and let the circuit sort out the other values. For example, if you’ve two setups with different coil resistance, a 1.0-Ohm and 0.5-Ohm, and vaping at 5 volts, vapour generation and overall device performance will be different. But if you choose to vape at 40 watts in both cases, the performance of both setups will be consistent.

Your choice of e-juice will make a difference in the size of the cloud generated. The PG/VG ratio dictates the amount of vapour. This is pretty simple one, a higher Vegetable glycerin e-juice makes bigger clouds. Conversely, a higher propylene glycol e-juice causes a stronger throat punch. Nevertheless, when your VG ratio goes beyond 50%, the consistency of vape flavor goes up which can adversely affect some tanks, but sub-ohm tanks work perfectly.

Also recall when you’re drawing more vapour to create large clouds, you’ll also be intaking more nicotine. For that reason, you may be required to reduce your nicotine concentration. Besides, when the PG ratio goes beyond 50%, it can bring some discomfort like being quite harsh to your throat. So a PG/VG proportion of 50/50 is the most recommended ratio.

“How to produce thick vapour clouds” is a huge topic, but we’ve only covered things that you ought to do to tailor your vape. Besides, getting the appropriate size of the cloud for your vaping preferences is all that matters. As much as there is no wrong or right way to vape, you do not require those dense and billowing clouds to get satisfied, they are just bonus points!

It’s wise to balance vapour production against other preferences such as throat hit, flavor, and easiness of draw among others. The best way to experiment is to try out a higher power setting, a higher VG e-liquid, a modern sub-ohm tank, and tweak your airflow. You can then work towards determining the appropriate balance of these to suit your taste.