All You Need to Know About Synthetic Nicotine 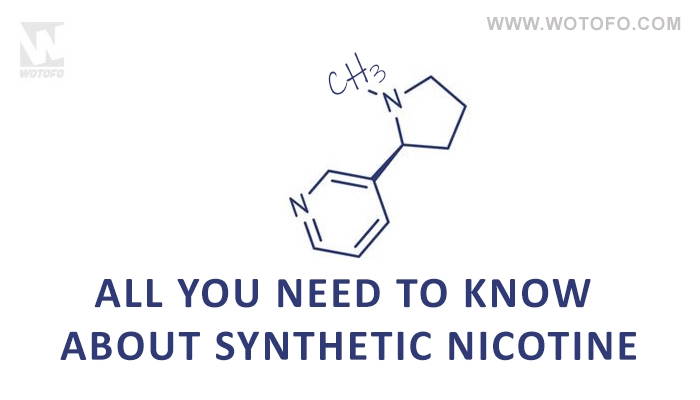 What comes to mind every time nicotine is mentioned is tobacco, irrespective of whether it’s meant for vaping, smoking, or medicinal purposes? Nicotine is mainly obtained from tobacco, and this is a logical affiliation and thus often products that contain nicotine are subjected to the same legislation as tobacco products.

Sometimes, though not all times, nicotine is generated from non-tobacco products which are regarded as synthetic nicotine.

For the longest time, tobacco products have been profiled with unfortunate reputations by agencies as having dangerous effects on your health such as lung infections and cardiovascular diseases. But this is absolutely different when it comes to e-cigs because there’s neither combustion nor production of smoke. Besides, the nicotine contained in these vape flavors is pharmaceutical grade nicotine which is 99.9%.

Nicotine keeps consumers using nicotine products, even when they’re compelled to quit. It’s highly addictive as it changes the way our brains work, triggering cravings for more when we go for some time without ingesting it. Some nicotine products including vape flavors and cigarettes deliver nicotine to the bloodstream very fast where it’s absorbed into the brain in a fraction of a second. Teens and young people are at higher risk of becoming highly addicted because their brains are developing.

The majority of them aren’t aware of how easy it is to become a “slave” of nicotine products as a great percentage of them are misguided by peer pressure. In adolescents, exposure to nicotine can damage normal brain development and cause long-term disorders like increase impulsivity, depression, bipolar, or mood disorders. That’s why it’s always advisable to sell nicotine products to persons above 21 years of age.

Away from the adversities of nicotine, one of the main reasons for switching from smoking to vaping is the need to reduce health risks associated with smoking. Also, addiction to the alkaloids, nicotine, in particular, found in tobacco alongside the experience of smoking, vaping is such a significant way of eliminating the harms posed by smoking ordinary cigarettes. The nicotine used in vape flavors is extracted from tobacco plants and this implies that technically, vape flavors are classified as part of the Tobacco Products Directive (TPD).

Also, it means that vape flavor producers have limited ability and licensing to promote and market their products. For instance, most vaping sites require visitors to those sites to declare their age before being allowed to view the content. Synthetically generated nicotine, simply synthetic nicotine is a major replacement to free smoking and it’s less restricted by tobacco product legislation. But what’s synthetic nicotine and how’s its safety?

Like caffeine in coffee and tea, nicotine is a sort of stimulant that causes addiction after consuming it for some time. Whereas the largest source of nicotine is a tobacco plant where it’s found in high concentrations, nicotine can as well be extracted from other unsuspected sources such as the nightshade family of herbs, but in very low concentrations. It’s been established that common foodstuffs like green pepper, potato, cocoa, and tomato among others contain small quantities of nicotine.

A common misconception about nicotine is that, when used in small quantities, it does not present any unanticipated harm to your health. But it is through the combustion of tobacco content to generate carcinogenic products and deadly gases (by smoking) that’s deadly.

Whereas nicotine is probably the chemical that makes smokers firmly hooked to ordinary cigarettes, there are better and safe ways of consuming it: by shifting from regular cigarettes to e-cigarettes. In the new method, a large percentage of those carcinogens, tar, and poisonous gases are gotten rid of. E-cigarettes and vape flavors are available in wide varieties and vapers can select their most favorite flavors and nicotine strengths.

For instance, if you’re an ex-smoker of strong cigarettes made from rolling tobacco, you’ll probably go with a 1.8% nicotine strength vape flavor and this will give an equal experience. If you wanted to reduce your nicotine consumption, then from here, your next step would be 1.2% nicotine strength, then move on to 0.6%, and later to zero-nicotine vape flavor. And this will work exemplary, something that would be hard to achieve with ordinary cigarettes.

Vape flavors used in e-cigarette contain pharmaceutically refined nicotine, also referred to as freebase nicotine that’s extracted from tobacco plants using chemical processes. The final product is a distill of natural nicotine and it’s 99.9% pure. The pharmaceutical-grade nicotine is then blended with other liquid concentrates (propylene glycol and/or vegetable glycerin) and some flavorings to improve the taste. So, what’s the difference between synthetic nicotine and tobacco-derived nicotine?

Scientifically, tobacco-free nicotine bears the same molecular formula (C10H14N2) as tobacco-derived nicotine. Also, the two nicotine types have a uniform set of advantages. Regarding the chemical composition of both types of nicotine, there is no difference. Essentially, the two are much similar even in terms of satisfaction levels.

Their respective processes of production are the only difference between the two types of nicotine. By definition, tobacco-free nicotine is produced using chemical substances such as ethanol, sulphuric acid, and niacin. Synthetic nicotine doesn’t come with nitrosamines that are contained in tobacco nicotine. Nitrosamines are famously known for creating unpleasant tastes (flavors) and some level of harshness. To mask nitrosamines in poor-quality tobacco-derived nicotine, vape flavor producers use intense flavors and some types of sweeteners.

At least there are no restrictions regarding tobacco-free nicotine as no formal regulations are prohibiting the production and consumption of synthetic tobacco products. According to Tobacco Control Act, all products processed or extracted from tobacco and meant for human consumption including all the comments, parts, and/or accessories of tobacco products are regarded as tobacco products.

The tobacco Act, being the definer of what tobacco products are, excludes products that use synthetic nicotine from the scope. Consequently, the popularity of synthetic nicotine has risen and the majority of vape flavors have embraced it as it provides a solution to Premarket Tobacco Product Application regulations.

Nevertheless, legislations regarding tobacco-free nicotine are expected to tighten once the product becomes more readily accepted in the vaping market. Authorities across the world, for instance, FDA are much aware of the development.

What is Vapers Tongue? How to Get Rid of It?

Even though synthetic nicotine might sound new, especially for newbies and the non-vaping community, it’s been around for quite some time. Vape flavor manufacturers have been using this option to make their products. Today, it appears like the industry has embraced it and is making huge tides towards fully actualizing it. Having said that, it does not necessarily imply that everything about synthetic nicotine is known.

Education is paramount to knowing how to make appropriate decisions regarding your health. Particularly when quitting a lousy habit, you’ll find it very natural to understand the decision you’ve made is the right choice, it’s effective, healthy, and safe.

Essentially, it’s only produced using chemical processes. For vapers seeking to reduce their nicotine intake and ultimately cut their association with tobacco, synthetic nicotine is the real deal. Besides, it’s at the same level in terms of safety as the regular nicotine they’ve been used to and delivers the same satisfaction level tobacco-derived nicotine has.

Tobacco-free nicotine is costly to produce. Consequently, it’s rarely a stimulant in the manufacture of vape flavors. Comparing its cost of production with that of tobacco-derived nicotine, the former is steeply high. 1-liter of 100-mg of tobacco-derived nicotine produces about 18,000-ml of 6 mg nicotine strength vape flavor and costs about $100. On the other hand, 1-liter of 100-mg of tobacco-free costs about $260. This is because the process of production of synthetic nicotine is way more costly compared to extraction of free occurring nicotine in natural nicotine.

What The Future Holds

Right now, tobacco-free nicotine isn’t regulated by food and drug agencies as a drug, implying it does not classify as a tobacco product. Some of the manufacturers that were not accredited by food and drug authorities to produce vaping supplies have turned to use synthetic nicotine as it’s not bound by the same authorization. Anti-tobacco groups have been pushing for authorities to make changes to regulations regarding the consumption of synthetic nicotine.

In response, vaping advocates have, however, castigated the efforts by these groups and termed them as being misguided. They argued (vaping advocates) that synthetic tobacco was invented to get rid of various impurities contained in natural nicotine, but not to abscond regulations. They term it as a witch hunt and an extension of the war on contrabands drugs to nicotine, which isn’t acceptable.

Instead, the advocates extend an olive branch to the authorities to regulate all forms of nicotine products and ensure they all comply with marketing, promotion, and sale for personals of not less than 21 years.

Nicotine is a chemical stimulant that occurs naturally in tobacco trees and tobacco-derived nicotine is nicotine in its pure form. When punches of tobacco-derived nicotine are consumed, the chemical is absorbed into the bloodstream and transported to the brain system. The majority of users have a general which contributes to seductive and stimulating effects. Standalone nicotine isn’t disastrous to the body, but high concentrations of nicotine induce side effects like nausea, headache, drowsiness, fatigue, tremors, and palpitations.

To make it more potent, ammonia is added to tobacco-derived nicotine to create “freebase nicotine”. That way, pure nicotine is made more effective and easily absorbable in the body. The vast majority of vape flavors in the industry contain freebase nicotine.

What’s The Difference Between Synthetic Nicotine and Natural Nicotine? 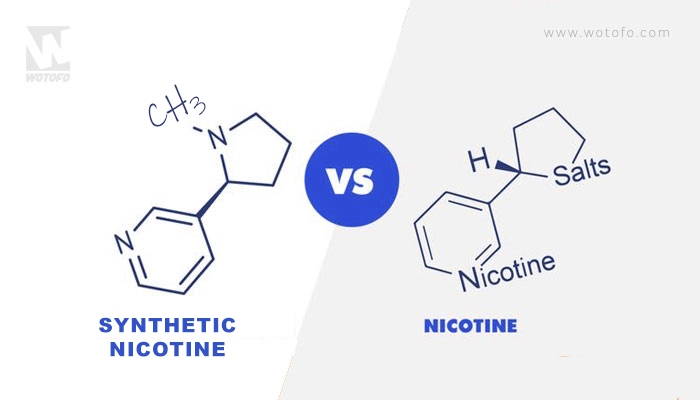 Tobacco-free or synthetic nicotine could be the way to, especially for small-scale manufacturers who might have been denied accreditation from food and drug authorities to manufacture vaping products. For huge establishments and reputable companies like Wotofo, synthetic nicotine products can be a game-changer thanks to increasingly growing popularity.